Curiouser and Curiouser: The Importance of Intellectual Curiosity 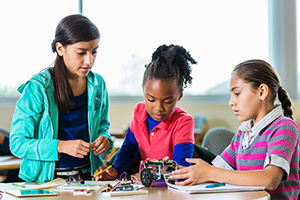 The reason for this blog’s title will become clear in the next two paragraphs.

It is, as you undoubtedly remember, a phrase uttered by Alice during her adventures in Wonderland. This fantastic work of Charles Dodgson—pen name Lewis Carroll—is well worth reading, if you haven't done so, or re-reading, if you have. The first two paragraphs alone are so short and elegant as to warrant memorization, and they include the thoughtful observation, “...and what is the use of a book,’ thought Alice ‘without pictures or conversation?’”

The Third Pillar of Academic Success

When we think of the growth mindset, the two characteristics most often mentioned are intelligence and effort. What is just as relevant, but often overlooked, is intellectual curiosity. Sophie von Stumm and her colleagues have described it as “the hungry mind” and “the third pillar of academic success,” which are perfectly appropriate. You might want to take the time to read their scholarly work, or considerably less time to read a commentary on their study.

Almost everyone admires intellectual curiosity, which takes many forms. It is, of course, the hallmark of successful scientists, but it is just as important in other areas of endeavor. The much-loved art of Vincent van Gogh was deeply influenced by his interest in Japanese culture. This interest grew because of his intellectual curiosity, and in combination with his move to the south of France, changed the course of art history.

Steve Jobs was described as possessing “omnivorous curiosity.” He was much less techie than most people realize, but he had a knack for raising questions that sent his engineers down productive paths.

If you read a biographical sketch of Charles Dodgson, you will discover his curiosity was abundant, as evidenced by his interest in photography, inventions, and mathematics. He created a game that resembles Scrabble, among other things, and developed an algorithm to find the day of the week based on the date.

But there is considerably more to intellectual curiosity than academic accomplishment or career success. Intellectual curiosity enriches our lives in ways that might surprise you. One of the most endearing characteristics of children is their natural curiosity. Most people lose this trait as they grow older, often because life is just too busy. But those who retain the “life is a science project” attitude benefit in a number of ways, not the least of which is well-being. Scott Barry Kaufman has written about this very elegantly, and he points out correctly that if you have lost your intellectual curiosity, you can get it back. Personality is not fixed, either.

Given the acknowledged importance of intellectual curiosity, why don't we do a better job in education building this characteristic among students and encouraging it among teachers? I'm not sure what the answer is, but maybe it seems like too much fun. Another possibility is that it doesn't fit our current model of accountability testing. But that might be changing because of provisions in the recent education legislation, Every Student Succeeds Act.

Meaningful assessment plays an important role in education in many ways. The primary purpose of assessment should always be to inform instruction, whether it is in diagnosis of learning problems, progress monitoring, or other constructs that contribute to a rich learning environment. Valid and reliable formal assessments have a place in the accountability structure of education, but single-incident, disruptive assessment should not be the prime directive under which we operate. There are too many other options available that are transparent, based on larger samples of student behavior, and easily implemented.

Jobs is quoted as saying, about school authority, “They came close to really beating any curiosity out of me.” This is not an indictment of teachers. Jobs recognized that his teachers changed his life for the better, describing his fourth-grade teacher as “one of the saints” in his life.

Many people would agree with Jobs that “the authorities,” in some cases, are discouraging teachers and students from exercising intellectual curiosity. Their rationale is understandable, to some extent, because so much emphasis today is on mandated accountability testing.

But the resistance is strong, and every day in a school somewhere, a teacher is asking students questions like, “Why does the moon look so big just before it sets?” or “What is that giant white flower Georgia O'Keeffe painted?” And some smarty-pants kid will look at the album on a teacher's desk and exclaim, “What is that big square on your desk, and is there really a dark side of the moon?”