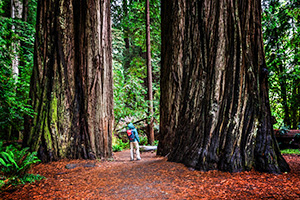 Traditional algebra word problems have a bad rap and for good reason. Students are hardly enamored with content of the typical word problem, and its relevance to the real world is questionable at best. Amdahl and Loats (1995)1 captured this sentiment in their amusing tour of beginning algebra:

“Folks who write math books live very different lives from you and me. They seem to spend a lot of time on trains, for example, which leave cities you and I rarely visit, in hopes of meeting their buddies on trains at destinations in-between … They launch rockets across rivers, build bridges, and agonize over how tall various trees are. After a couple of years of math classes, you’ll be uncomfortable hiking through the woods without your calculator handy.” (p. 104)

I was reminded of this quote as I was reviewing a recent Algebra 1 textbook. In one of the chapters near the end of the book, a complex rate x time = distance problem appeared in the middle of what was likely to be homework exercises. How the student was supposed to solve the problem followed a format that hasn’t changed much in 50 years. Look closely at the two pages of didactic, step-by-step explanations for how to solve a rate/time/distance problem that preceded the exercises. Unfortunately for the student, the problem (shown below), didn’t follow either of the model explanations found on those two pages. I have reworded the problem slightly, but the essence is the same.

“Dallas and Chicago are 800 miles apart. Planes leave both airports at the same time, and they are each flying at 300 mph. There is a wind, and the plane from Chicago gets to Dallas one hour before the plane from Dallas gets to Chicago. How fast is the wind?”

Students (and adults reading this blog) have seen this kind of problem before in various renditions, most notoriously in the form of someone in a canoe paddling down a river at a certain speed and back again. They ride the current one direction and fight it the other. Sometimes, the distance is unknown, sometimes it’s the time, and in the remaining cases the rate is unstated. Most students who have succeeded in math as far as the problem above, can easily determine the wind speed is unknown and hence, should be assigned the variable x. That’s not the challenge in solving this problem.

A variety of math educators in the last two decades have been highly critical of these kinds of problems, not only for their artificial context, but for the fact that even if students solve these kinds of problems correctly, they do little to help them generalize to other word problems that might be only slightly different in their wording, much less to “real world” problems, which tend to be far more ambiguous in the way they are constructed.

Are these criticisms valid? The answer is yes and no, and I base this on a recent synthesis on math problem solving that I helped develop for the U.S. Department of Education’s Institute of Education Sciences (IES).2

Yes. The typical format for teaching word problem solving, at least in the secondary grades, is to follow the textbook materials, work one or two examples, and then assign selected problems for homework. Call this approach “teaching after the fact” insofar as most of the problem solving instruction occurs, if at all, by working the homework in class. Should the motivated student struggle with a problem or get it wrong, he or she will attend to the next day’s explanation in class.

A good number of students who struggle with complex word problems like the one above (and most students do) often apply ham-fisted methods to force the numbers in the problem into a formula (e.g., r ∙ t = d). Without the benefit of the answer in the back of the book, many solutions look reasonable even though all but one is incorrect. So, should we abandon these kinds of problems in search of longer, more “authentic” or “real world” problems?

No. One of the major observations in our IES problem-solving guide is there are many kinds of problems, and they serve different purposes. Geometry is rich in problem solving, but so is the domain of numbers and operations. There are occasions where long, multistep problems are important because they have real world applications and they develop persistence. But there are occasions where students need to work several problems of the same type to become more facile in understanding a concept of formula. This last point argues for the kind of rate problems found in so many algebra texts, particularly the one shown above. What tends to be missing is a clear, research-based structure for teaching students in the first place, and that is what our IES problem-solving guide provides.

First, teachers can begin by helping students think about the problem through a series of questions they might ask rhetorically (e.g., “Is this problem similar to or different from ones we have worked before?” “Is there a rule or relationship here?” “How are things changing?” “How would an equation or formula relate to the problem context?”). These questions are intentionally broad so the teacher doesn’t simply begin to solve the problem for the student. Another purpose of this first step is to guide students in thinking about the problem beyond what is called “the surface story.” In other words, what lies underneath the problem involving two airplanes flying to and from Dallas and Chicago are specific quantitative relationships. A problem like this one can involve planes, one boat on a river going to and from a destination, and even the flight of golf balls on a windy day.

A second critical step is to encourage the use of appropriate visual representations that help further clarify the nature of the quantitative relationships. Below is a schematic diagram. It helps translate the problem into a visual representation that captures key information. Unlike the elaborate pictures students might draw, schematic diagrams make visible the relationship between different quantities. Students need a good deal of practice and feedback in constructing schematic diagrams and, by that fact, this problem should not be the first time they try to construct one.

A third step in the case of this problem is connecting the diagram to formal notation or, in this case, the rate/time/distance formula. It’s likely many students might think of the formula only in its original form as shown below. Those students need to be prompted to convert it based on what they need to know (i.e., in this problem, it’s time).

Understanding that time (not distance or rate) is the outcome most relevant to solving the problem is only half of the issue. Students need to structure the relationship of time in the appropriate manner. Specifically, we need to find the difference (or subtract) in this problem to capture the fact that it took the plane from Dallas to Chicago one hour longer to fly the 800 miles than the plane from Chicago to Dallas. This can be stated informally as:

Now, students are in a position to write an equation that represents the quantitative relationships in the problem.

High school algebra takes care of the rest of the problem as well as checking to make sure the solution (i.e., substituting for x) makes sense.

Problems aren’t valued because they represent real world conditions. Wind speeds are never steady, and planes take off and land at different speeds from those at mid-flight. No two planes ever take off at exactly the same time. However, there is an immense value to problems like these because they help students become more facile in a core area of mathematics: identifying and organizing quantitative relationships.

Furthermore, students can be presented with variations on these four- to six-sentence problems so they can learn to see common structural features of algebra beyond the surface story of each problem.

Success in mathematics beyond algebra is highly contingent upon these abilities.

Join us for second of two webinars presented by John Woodward addressing the role of math problem solving in the intermediate and middle school grades.